In December 2021, Friends of the Shasta River agreed to host on this website content from WCWC, which was phasing out its own website, so that the story of this important struggle over water rights in the upper Shasta River basin can be preserved–and further updated as the story continues.

Welcome to the redesigned WCWC website. Please click on the menu items above to read about the History of our Campaign, a Summary of Beaughan Springs water rights, and a page about the WCWC organizers. The latest updates on our campaign follow below. Thank you!

Key to the unique vitality of the Shasta River are the springs of Mount Shasta. Snow and rain falling high on the mountain percolate deep into the mountain, emerging, decades later, as springs thousands of feet below and even many miles away, out in the Shasta Valley.

This cold, pristine, mineral-rich spring water has long supported cold water dependent fish, such as salmon and trout, and has been essential to human livelihoods.

Much of the current work of Friends of the Shasta River focuses on the need to protect and restore the cold-water springs in the Shasta Valley (below Dwinnell Dam) so that their flows can be protected and restored for the benefit of salmon, other fish, wildlife and people. But the springs in the upper Shasta basin, above Dwinnell Dam, were once an important part of the river’s natural ecology—and still could be in the future.

In recent decades the pristine spring water of Mount Shasta has been threatened by outside investors and the international water bottling industry, which see this water as a commodity and an opportunity for profit-making. Communities around Mount Shasta have resisted this trend and successful fights against water bottling proposals having been waged by citizens in both McCloud and the City of Mt. Shasta.

A long and ultimately successful campaign has also taken place in the Shasta River basin, in the community of Weed. Beginning in 2016, the local grassroots community group, Water for Citizens of Weed California (WCWC), worked to defend their community’s pristine spring water source from an attempted takeover by Roseburg Forest Products and Crystal Geyser Roxane, two large, multimillion-dollar corporations with manufacturing operations in Weed.

The water in question, 2 cubic feet per second (cfs) from Beaughan Springs, a tributary to the Shasta River, was the community’s main source of drinking water since the early 1900s, and WCWC worked to protect that water right for the public trust. WCWC’s campaign included community outreach and education, media coverage, research into the legal issues surrounding the disputed water right, and direct actions—demonstrations, complaints to local regulatory agencies, and advocacy to public officials.  These actions put significant pressure on the corporations, which, in March, 2021, assented to an agreement with the City of Weed, by which Weed gained full ownership of the entire 2 cfs of disputed Beaughan Springs water in perpetuity.

In the process of advocating for the public right to water, WCWC and nine individual community members (the “Weed 9”) had to defend themselves from a ‘SLAPP’ (Strategic Lawsuit Against Public Participation) intimidation lawsuit initiated by Roseburg, a process that tied up WCWC resources for almost three years. Currently, WCWC and the Weed 9 are countersuing Roseburg’s law firm for damages, and the case is proceeding in the appellate court.

December 2021 – At the end of 2021, our SLAPP-back lawsuit against the lawyers who sued WCWC and the “Weed 9” on behalf of Roseburg Forest Products continues to slowly wind its way through the appellate court system. We are suing the law firm White Brenner LLP (formerly Churchwell White) of Sacramento and two lawyers, Barbara Brenner and Robin Baral, who led Roseburg’s intimidation SLAPP lawsuit against WCWC and the “Weed 9.” We are seeking damages for economic and non economic harms, and have requested a jury trial. Lauren Regan of the Civil Liberties Defense Center is our lead attorney. More updates will be posted here as they become available. 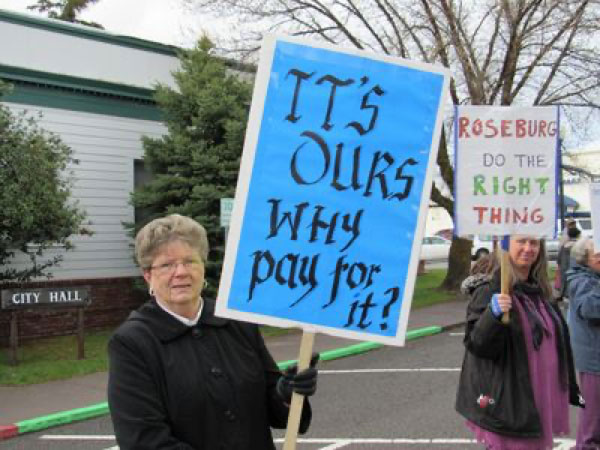